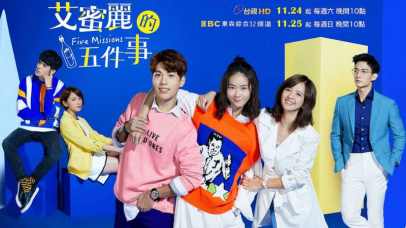 Can a magical letter in a bottle help someone face the most difficult issues in their lives?

Emily (Aviis Zhong) is an assistant in a law firm that specializes in divorce cases. Although she has the help of her best friend photographer, Dou Ru (Sam Lin), life hasn’t been easy. Her boyfriend treats her more like a servant than a lover, she hasn’t talked to her father in years, and she is bullied at work.

One day she finds a letter in a bottle with a list of things Emily has been avoiding.

After her discovery, bizarre events keep occurring around her which leads her to believe that the bottle is actually cursed. Could it be that the only way to break the curse is to follow the list of things Emily has been avoiding the most?

Oh wow… This went from being something good that I unexpectedly liked to absolutely fucking annoying by the end of the series. I actually started watching this because I was bored and going through my kdrama slump which means I have been actively watching this every week since December! THAT IS THREE WHOLE MONTHS. I actually stopped watching when I finished episode 13 because I was way too frustrated and then I ended up forgetting to finish it up and so I did last night.

It seems as though I am falling victim to the bullshit that happens when a drama gets to its later episodes and everything gets needlessly complicated and drawn out in order to create this tension that mature adults should be able to talk through. If anyone knows me they know I absolutely cannot stand the ‘break their heart to save them’ trope. I think it’s stupid and selfish and it takes away the choice from the person that you supposedly love. I mean sure I can understand why characters choose to do it, but I still do not like it. More on this later.

Emily’s Five Things really started off strong and solid. It drew me in because I have such a soft spot for slice of life dramas, and I can enjoy a female lead who has kinda lost her way as it resonates with my feelings. I liked that every episode started with a flashback to her in high school days because you were able to see how different Emily was back then and understand Dofuru’s (Dou Ru) frustration with the way she was dealing with her relationships with the people around her. I especially needed her to break up with her boyfriend ASAP because he was just straight trash.. How she even started dating him was beyond me.

When it came to the plot everything felt like it moved very quickly, but also extremely slow.. I was on episode 7 thinking it was at least episode 21. There were very good themes and a strong cast. The overarching theme of being yourself was very well done. Although the synopsis hints at the possibility of some supernatural events occurring and frankly so does the first few episodes, that is not the case whatsoever. It truly is just a slice of life comedy with its few eccentric moments.. I will admit that I did end up feeling a bit cheated because of this.

So while this show was very enjoyable in it’s earlier times, my biggest gripe came down to how they chose to do this friends to lovers thing..  MILD SPOILERS AHEAD.

Emily and Doufuru love each other. Sure they both have liked each other for more than ten years and may have paused liking each other while they were dating each other people but at the very root of it all, they loved each other. Emily always called him her best friend and he did the same. He was always jealous of both the ex and the lawyer dude and she was jealous of the anchor girl. It was frustrating watching these two idiots deal with their emotions. I think the biggest flaw was that the screenwriter gave us the moments of them being a couple that when it came down to the reason why they couldn’t be together, it felt like the cheapest of cop outs and made up tension. Okay you have an aneurysm so you’re gonna be a  martyr and break her heart by feeding her lies about being incompatible, reuniting with the  lovely anchor lady and then run away from the country.. Boyyyyyyy….. It literally got me so damn frustrated because like he literally could’ve just talked to her and explain his situation. I swear I would rather just watch episodes of slow build steadily and then getting together than having people somewhat get together then break up for a stupid ass reason only to then get back together anyways in the last scene. And yes having an aneurysm or dying or any of that fucking variation of ‘I will break up with them for they’re own good because I am sick’ is selfish and stupid. TALK TO YOUR PARTNER. Deadass just talk to them and figure out whether they love you enough to wanna put up with your illness and like breakup amicably instead of having them look like a fucking fool trying to win you back when you’re literally destroying their world with lies and treating them like shit.. It’s just so stupid to throw away ten years because you wanna be a damn martyr.

So anyways… My favorite character was….uhhh no one by the end of it because all of them just really started acting a mess and irritating the shit out of me. Oh ! Wait, I lied.. I liked Jinming’s ex girlfriend.. She was so kind and refreshing because she was never vindictive and worked hard to help him get Emily which we don’t get to see often so yeah I will go for her. Unlike I Will Never Let You Go, I am NOT willing to overlook the end and watch this again.

Would I recommend? Hit or miss… The first twelve will be nice to watch, the last three? Not so much.